I’m not sure that I have heroes anymore – and those I once had were certainly not wine writers. That said, if I did, and if they were, Hugh Johnson OBE would be a candidate. Several of his books are on my shelf, and his writings have accompanied my entire journey into wine over the last 25 years – I remember being gifted a copy of his pocket wine guide when I was perhaps 19 or 20.

Heroes tend to be flawed – if they are flesh and blood, ergo human, they will disappoint their disciples at some stage. No mortal remains forever on a pedestal. Hugh got my back up with some cursory remarks he made in the Washington Port about one of my favourite styles of wine last year, so I got it off my chest in a blog post. What happened next, to ape a thousand click-bait articles, was more remarkable.

A mutual friend, the ever diplomatic and open-minded Justin Howard-Sneyd MW felt sure that Hugh’s negative remarks about orange wine (“A sideshow and a waste of time”) were probably based on tasting sub-optimal examples. He suggested we engineer a meeting. I accepted immediately. Who wouldn’t want to meet one of their not-quite-heroes?

This is how I found myself on December 14 2016, jacketed and coiffed, at the doors of London’s 67 Pall Mall – an exclusive private members club for the wine trade, and other corpulently walleted winelovers (It isn’t cheap to join).

Hugh, Justin and I met at 11am in the wine library at 67 Pall Mall, and tasted eight wines together – a selection from the 11 wines which I presented in a public tasting at the club, the same evening.

I pondered obsessively beforehand – what did I want to get out of this meeting? It wasn’t about changing anyone’s mind, or proving Hugh wrong. Rather, I wanted to demonstrate that the art of using long skin maceration to make a white wine is a living tradition with plenty of weight behind it. And that it is capable of producing fine wines. Was I teaching granny to suck eggs? A half-century of tasting

Hugh is of course the perfect gentleman, so our meeting and tasting was conducted with utmost politeness and respect. With the very first bottle, it became clear that tasting wine with someone who has 55 more years of professional experience than you do is pretty fascinating. Hugh had many insights that would never have occurred to me.

We started with Le Due Terre – Sacrisassi Bianco 2014, a delicate wine I’d selected deliberately to break us in gently. Hugh remarked that it reminded him of the kind of wine you’d get at a café anywhere in the Mediterranean 40 years ago – served in a carafe and probably costing less than the water. This wasn’t a negative comment, he seemed to relish the memory and pointed out that sometimes such wines could be very good.

The association made perfect sense to me. House wines served at modest eateries would very often have been made on or near the premises, whites quite possibly with a bit of skin contact and without obsessing to achieve a pure, varietal style with a starbright hue that we now expect. To be fair to Le Due Terre, their white blend has a lot more refinement than the average carafe wine – at least in my opinion! The Rennersista’s wonderfully perky Welschriesling 2015 proved to be a palpable hit once again. Hugh loved the freshness, Justin was fascinated by the gingery aromas. This is an easy wine to love, and we were all quite besotted. No-one cared that it was defiantly cloudy.

Sandi Skerk’s Ograde 2012 was the first wine to divide us. Justin and I felt it was truly magical, with rose petal and jasmine aromas and so complex and balanced. Yet Hugh found it a bit short, and was not wowed.

None of us loved Ronco Severo’s Bianco di Severo 2013 – a wine that seemed broad and fiery, but without a strong defining character. This producer and this wine have showed much better for me before.

La Columbaia’s La Bianco de Columbaia 2015 showed a distinctive herbal, nutty palate, but was rather murky and unclean compared to the previous wines. It also didn’t last the day without developing some mousiness (I discarded the open bottle for the evening tasting). I’ve seen this show much better in other vintages, and on other occasions.

Hugh found an enjoyable sherry like element in Terroir-al-Limit’s Pedra de Guix 2014 – which is not to suggest that it was oxidised, rather that it had a salty, nutty lick. I messed up with this wine, I’d meant to bring his Terra di Cuques, which shows wonderful aromatics from 20% Muscat in the blend. I was surprised we found no aromatics here, until I checked the bottle much later.

With Strohmeier’s Sonne No. 4 (Sauvignon Blanc 2013, with a whole month of skin contact), Hugh found the first “2nd glass wine”. “This is very, very pleasant”, he concluded. A perfect wine in my estimation – mature and well integrated, yet pulsing with excitement and character.

We finished with a classic of the genre – Gravner Ribolla 2007. This majestic wine, with 6 months of skin contact in Georgian qvevri felt a little closed on the nose, but on the palate it was utterly open for business – A deep, spicy behemoth, teasing with suggestions of honey, smoke and hay.

This wasn’t Hugh’s first encounter with Gravner’s wines. He was in no doubt that this was the wine of the tasting, so we poured another glass for the impromptu photoshoot.

The discourse did of course turn back to the article, our reason for being in the room together. It turned out that Hugh did not have a well defined view of what the term “Orange wine” means in the 21st century. We both agreed it is a difficult, confusing piece of nomenclature. Hugh also admitted that once the Washington Post journalist mentioned the dreaded ‘N’ word, he might have reacted more to that, and less to the “Orange wine” niche itself.

This confusion of “natural wine” with “orange wine” is something that bedevils the wine world. Yes, they overlap. But they are not the same. The latter describes a specific winemaking technique (long skin maceration for white wines). The former is a broader church, more of a set of ideals, albeit with a strong non-interventionist stance on the winemaking. An orange can be natural, but doesn’t have to be. A natural wine can be orange, but could also be red, white or rosé. Neither is inevitably made in amphorae!

Hugh thanked me for challenging him, and helping him to understand a little more what the current orange wine niche entails. Job done, I thought, and walked out of the club in a daze. If tasting with Hugh was a joy, my audience of 30 participants in the evening was almost revelatory.

Who would have thought that 67 Pall Mall’s members included such a diverse, open-minded audience? Not that I am being rude about the club’s demographics – rather that I expected that most would be more comfortable with classed growth Bordeaux or mature Barolo, and might not want to show up on a Wednesday evening near Christmas to taste some funky orange wines.

Half the audience had never encountered the style before. Everyone seemed to enjoy the wines quite genuinely. There was certainly shock at the beginning – but never disgust or closed mindedness.

I was particularly thrilled to meet two couples, the first (of a certain age) who had holidayed in Slovenia and returned to the UK with an insatiable thirst for skin contact. They playfully ribbed me at the end of the tasting, asking how many orange wines were available by the glass at 67 Pall Mall. Answer: None. Ronan Sayburn – take note. Your members have spoken!

Couple number two were also not in any way your average orange wine drinkers (is there such a thing?). Yet through her conversion to veganism on health grounds, they had found their way to additive free wines – and thus to orange wines, which they now enjoy on a regular basis.

It is wonderful to see that the audience for these supposedly divisive wines, that some claim are only enjoyed by hipster sommeliers, is actually much broader than one might suppose.

The evening tasting included the following wines (brief notes for those not included earlier):

Le Due Terre – Sacrisassi Bianco 2014
Rennersistas – Welschriesling 2015
Elisabetta Foradori – Nosiola Fontanasanta 2014 – like drinking a melted glacier, so pure and elegant, quite wonderful.
La Columbaia – Bianco di Columbaia 2015
Rossidi – Orange 2015 – In a rather dumb, brutal phase today, with its tannins sticking out more than I remember.
Ronco Severo – Severo Bianco 2013
Strohmeier – Sonne No. 4
Batič – Zaria 2007 – dense, full bodied, caramel and christmas spices, ripe, rather cooked fruit. Adored by about half the room for its power, lacking in refinement and freshness for me.
Vodopivec – Vitovska 2010 – disappointing to me. Very low acidity, slightly lacking in drive, yet my expectations were high.
Prinčič – Ribolla Gialla 2013 – Glorious, surpassing Gravner in openness and accessibility. So much fruit, texture and pure joy packed into a bottle.
Gravner – Ribolla Gialla 2007

It was fascinating to see which wines disappeared fastest at the end, when the audience were allowed to go to the open bottles and pour themselves another glass. Gravner & Prinčič were gone in a flash! Many thanks to the winemakers and importers who helped make this tasting possible – and special thanks to Doug Wregg and David Harvey (he who coined the term orange wines, let us not forget!), who stimulated much interesting discussion during the evening.

Drinks business published a report on this tasting here. 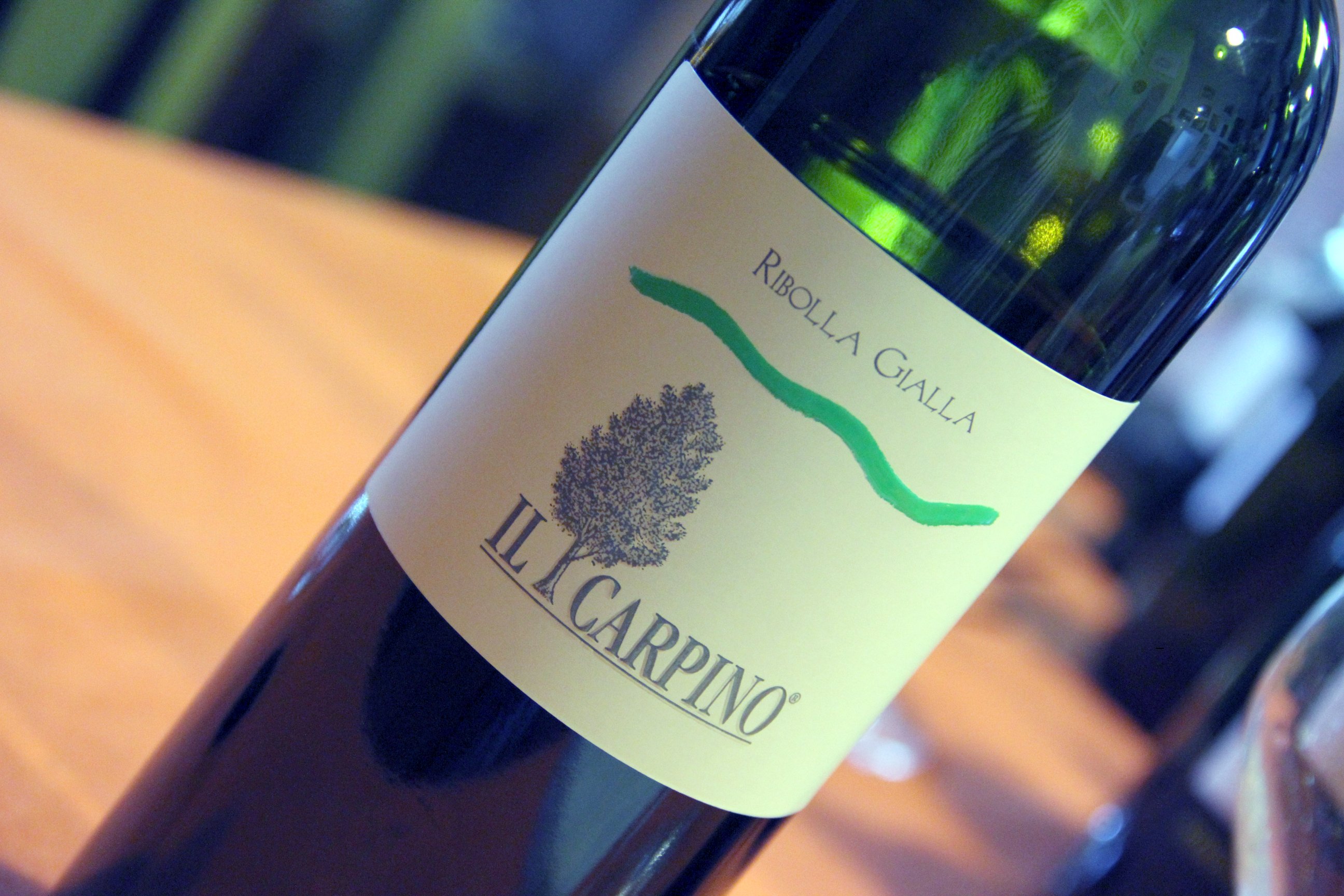 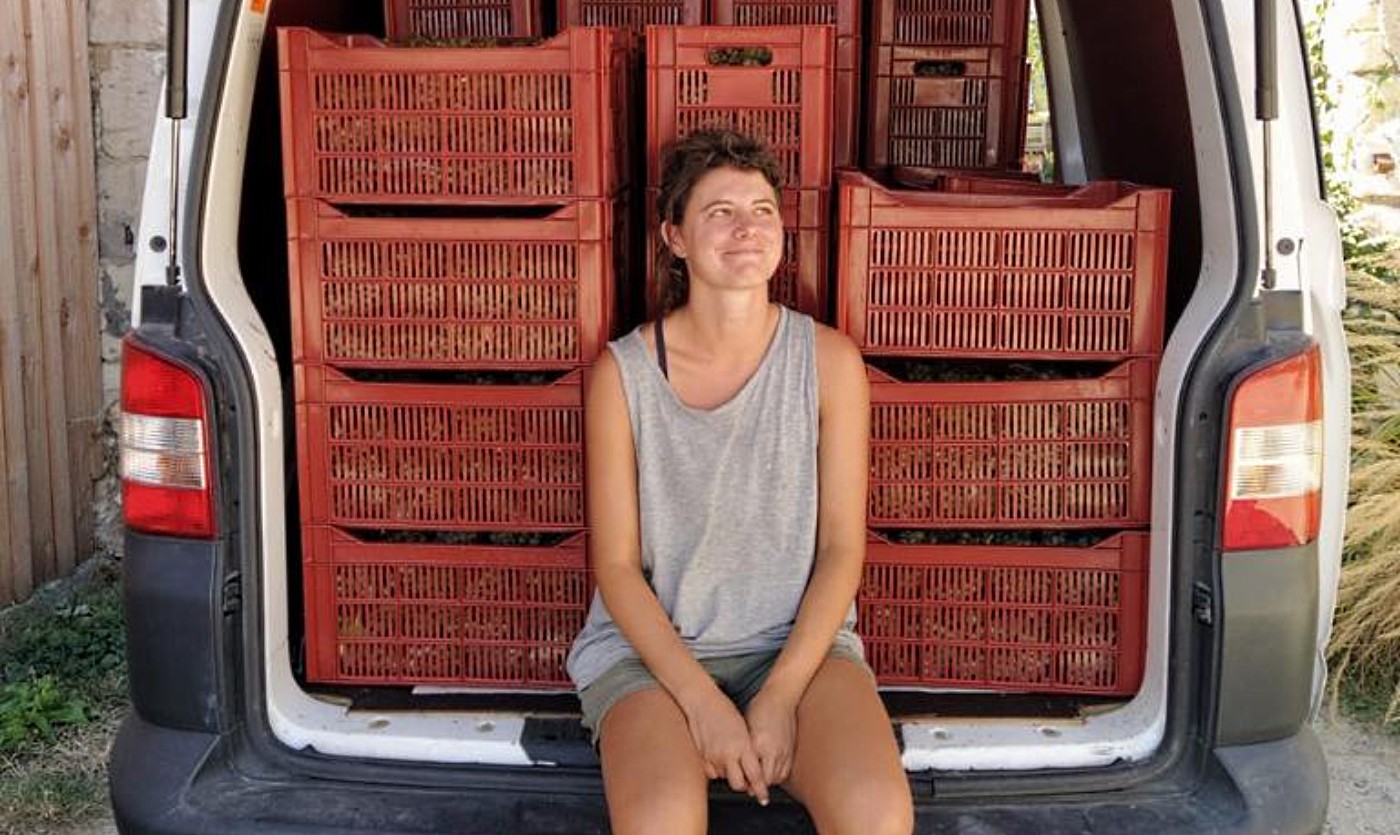 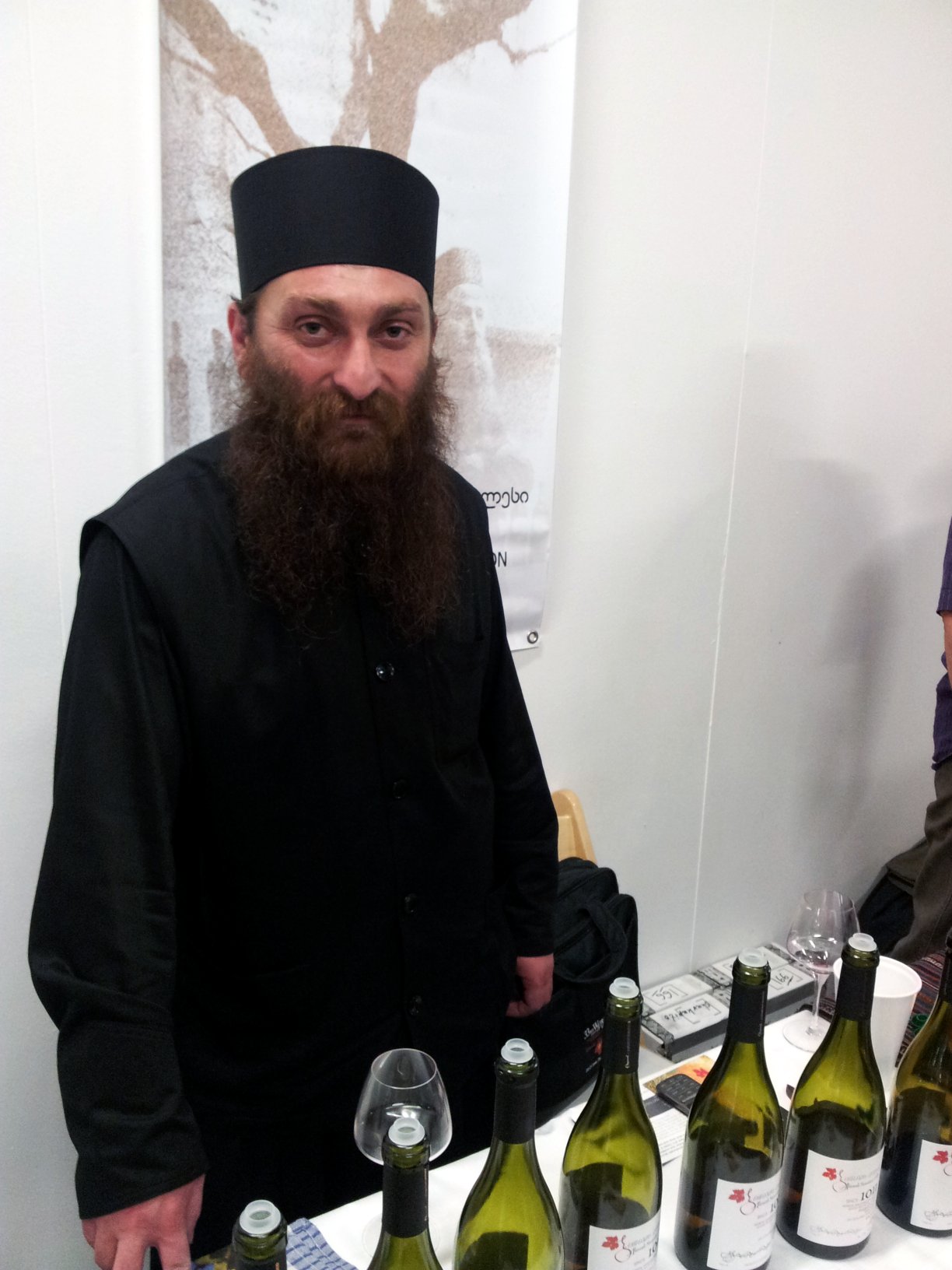 Raw, real or just natural? (Reflections on the Raw and real wine fairs of May 2012)

Thank you for this Simon; it will be very useful for my students taking the WSET exams here at Plymouth. I’ve added a link and note from my own WordPress blog, Toureme, where I write about writing in the travel and hospitality industries.

Thanks for reading, Dr. Mansfield – curious how it will help with WSET but glad all the same!

[…] time, and soon suggesting that natural wines were the wine equivalent of the Paleo Diet fur raised on Facebook and […]

It’s a pity that Ronco Severo’s Pinot Grigio didn’t live up to the expectations, but I recall older vintages that have stunned me in the past (also for Stefano’s other white wines like the Ribolla Gialla). And glad to read that you got to change Hugh Johnson’s point of view a bit:)

I love Ronco Severo’s wines normally, but it was just plain sulky that day . . .
We tasted his Bianco btw, which is a blend – not just Pinot Grigio.